2 grams
Amy Martin is the main antagonist in FAITH. She is a 17 year old girl who is presumably possessed by a demon. She attempts to kill John Ward while he is within the Martin House.

Amy is the daughter of Mr. and Mrs. Martin. She is the oldest of three children, the younger being Nate and Jason Martin.

In 1986, Amy volunteered at a local abortion clinic while her father, Bob Martin, was stationed within the Middle East. She became increasingly obsessed with her position, which worried her mother. During this time, strange things began to occur near the Martin's residence. When Bob eventually returned home, Amy's condition only worsened. The Martins, believing their daughter to be possessed, solicit the help of John Ward and Father Allred. The priests visited the Martin home on September 26, 1986, to conduct an exorcism on Amy. By the end of the night, Amy had killed Father Allred with her bare hands and strangled her parents with their own intestines.[1]

One year later, John Ward returns to the Martin home in order to conduct a second exorcism. Amy, fully consumed by the demon, attacks John as he explores the house. He confronts her in the attic, finding Amy sitting alone with her face veiled. As he begins the rite, demons gradually appear around them, and when Amy's veil removed John is able to see that her face has been completely mutilated. He finishes the rite, and Amy throws herself out the attic window and escapes into the woods.

As you leave the house, take a left on the path and follow it. You will eventually find a bleeding Amy in the clearing. By shooting her and returning to your car, you will be chased by a cop and receive the "Murderer" Ending (1 of 5). The news clipping says the John Ward is not an ordained priest and is supposedly convicted of murder.

Just before you enter the Martin household, Amy can be seen floating near the window. She instantly heads deeper into the house once John approaches.

Once you emerge the upstairs bed, Amy will begin to attack you. Initially, she will be invisible, appearing only as a linear trail of demonic symbols that creep towards you. By shining your cross in the direction of the symbols, Amy will appear and scream. Four copies of her will suddenly surround you, flashing. The true Amy will flash out of sync with her three copies. By shining your cross toward the correct copy, she will fly off, readying for another attack.

After you have dispelled her enough times, John Ward will say (depending on where you are in the house), "I heard a door open upstairs," or "I heard a door open," or if you're in the room to the attic, she will just float to it. You must now enter the attic and confront Amy, whose face is obscured. After a brief conversation, she will begin her attack. The difficulty of the fight is adjusted based on the number of notes collected beforehand.

Amy will stand in the middle of the room, unmoving. You must shine your cross in her direction to hurt her, causing her to flash a deep red color. During this time, gray demons will appear, creeping towards you. Their touch is lethal and must be avoided.

Amy will remove her veil and expose her mutilated face. She will then attack similarly to how she attacked you through the house, except your cross will do damage to her over time, rather than instantly dispel her. She will only be vulnerable for a brief moment, after which she will fly at you from the opposite direction. This attack must be dodged.

An arm bursts from Amy's face, and a pentagram will appear across the attic floor. She will cycle through two attacks. Her first is the create a spiral of demonic runes around herself. Touching these runes will kill you. Her second attack will see her flying along the lines of the pentagram. Each time, she will follow the pentagram for three of its lines, before reverting back to her rune attack. When sufficient damage has been done to her with the cross, she will abandon her rune attack and ceaselessly fly along the lines of the pentagram.

Amy makes a brief appearance in the background of when John finishes reading the newspaper clipping, she is seen standing behind a tree and staring at John before a cutscene plays, turning him into his Spider Demon form.

Amy after John has defeated her in the attic.

Amy with a veil 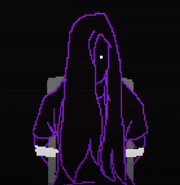 Amy tied to a chair. 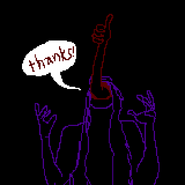 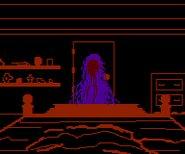 the original image of Amy in the "SHE IS HERE" sequence before Airdorf decided to do this rotoscoped animations.[2]