The sewer system, entered from an outside drain, is commonly known in the area as the "Candy Tunnels" evident from its outside graffiti. The tunnels are infamous for housing addicts, gangs, runaways, and the indigent of society. It is littered with trash and graffiti and houses incomprehensible evils well deep into its system.

More recently, it became the site of grisly murders. Police in the area believed the bodies to be related to local notorious serial killer Joe Baumann, nicknamed "Candy Store Killer." This theory is proven right when police later raided the tunnels at an unknown date and discovered Baumann, sparking a shootout that resulted in one officer's death and multiple injured including Baumann. The victims discovered in the tunnels are believed to be from Connecticut and Rhode Island within the last year.

John Ward finds himself traversing the sewer system later in FAITH: Chapter II. He discovers notes eluding to the shootout between police and Baumann and the grisly murders discovered in the tunnel system. One note, presumably from a drug-addict vagrant, suggests that cult-related activities are taking place deep within the tunnel system. After traversing deep enough, John encounters several demonic entities.

Throughout the entire system of tunnels plunged in darkness, John may spot briefly with his flashlight he spirits of two twin children or one sole child running. They are easily identifiable as they are one of few purple sprites.

In the final corridor, in the deepest part of the tunnels, John is ambushed by the demonic entity posing as Miriam Bell. Much to his surprise, Father Garcia suddenly appears and rescues him briefly. He informs John that only together can they stop this entity. They proceed to the final part of the tunnel system, a large square room painted with Satantic symbols, to stop the demon. As Father Garcia recites the necessary psalm, red cultists will pour out of the doors in the room to kill both of them. They will typically kill Garcia first and then Ward. They can be warded off with the cross. Eventually, both priests succeed.

Once the ritualist portion of the tunnels is reached, if the player goes several rooms to the right and then up one room they will encounter the room containing the letter necessary for the third ending. The letter can only be accessed if all three ritual requirements are completed: a pentagram drawn with blood from John's eye in the cemetery, the cornfield child is brought to the demon in the confession booth, and John killing the two civilians working on the truck as the demon spider spawn. 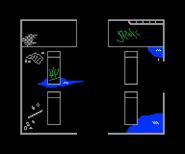 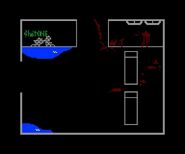 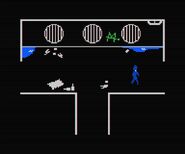 Add a photo to this gallery

Retrieved from "https://airdorf.fandom.com/wiki/Candy_Tunnels?oldid=1376"
Community content is available under CC-BY-SA unless otherwise noted.