The crucifix (referred to as the Latin "crux" in game)(alternatively known as a cross) is a representation of Jesus crucified on the cross, a principal symbol in Christianity. In the FAITH series, it is John Ward's most powerful "weapon". Pressing the action button will cause John to lift the cross in his facing direction. This action can be used to ward off demonic entities and spirits that attack John throughout the game series. Father Garcia also briefly uses a crucifix in the prologue of Faith: Chapter II . 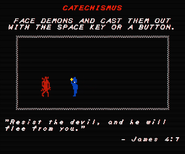 John holding his crucifix towards a red demon during the optional instructions sequence at the beginning of Faith.

John Holding his crucifix in Faith.

John holding his crucifix (viewed in mirror during Faith). 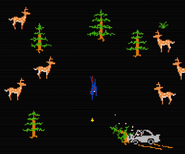 John reaching for his crucifix during an ending sequence of Faith.

Detail of "The Hunter" ending sequence. 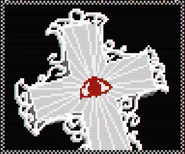 Father Garcia with his crucifix.

John with his crucifix in chapter III

Father Allred with his crucifix

Retrieved from "https://airdorf.fandom.com/wiki/Crucifix?oldid=3207"
Community content is available under CC-BY-SA unless otherwise noted.