Active / Determinant (depending on the ending of Faith: Chapter II)

Father Garcia is a Spanish Catholic priest first mentioned in FAITH and appearing as a supporting character in FAITH: Chapter II where he serves as the protagonist of the game's prologue.

Father Garcia is a Catholic priest with strong faith. At some point, he took charge of caring for a young boy named Michael Davies who had been afflicted with a violent demonic possession. Despite demands from the Vatican, more specifically from one Cardinal Gifford, to return Michael to his family, Father Garcia refused and believed that Michael was far too dangerous to be returned until he could be successfully exorcised. Despite three months of work, Father Garcia was unsuccessful in exorcising the demon from Michael. This resulted in the demon ravaging Michael's body to the point of being beyond recognition from the boy he once was. Briefly after those three months, during one of Father Garcia's exorcism attempts, Michael broke free from his restraints in the basement of Father Garcia's home, escaped to the second floor, attacked, and killed an unknown individual, and escaped into the wilderness. Father Garcia vowed that the righteousness of God would catch up to Michael before giving chase. At some point, he responded to Cardinal Gifford's request for the release of Michael by detailing in a letter the severity of Michael's affliction and disclosed a picture of Michael in his current state as proof.

Father Garcia makes a later appearance in the sewers of the "Candy Tunnels" in Connecticut to assist John Ward in engaging the demon posing as Sister Miriam Bell. Although Father Garcia can be killed during this segment, this is revealed to be a mere nightmare by John Ward and it is unknown if they battled any demons in real life together. At the end of FAITH: Chapter II, Father Garcia reaches out to John Ward in the form of a letter and depending on the ending will have specific instructions for him in his quest against the demonic evils haunting him.

Father Garcia as he appears in a rotoscope cutscene.

Father Garcia with his trusty crucifix, empowered when he recites from the holy books.

Father Garcia running. This sprite is shared with the Gray Figure. 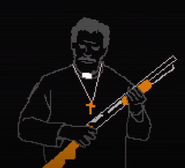 Father Garcia with a shotgun. 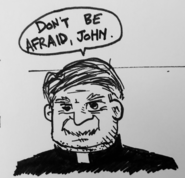 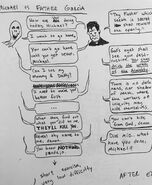