Female
Sister Miriam Bell is a character who appears throughout the FAITH series, appearing briefly in the trailer for FAITH and acting as the main antagonist and final boss of FAITH: Chapter II.

After the tragic events surrounding Snake Meadow Hill Church's past, the Catholic Church in Connecticut decided to reopen the church and attached orphanage. Their first step in doing so was sending Miriam Bell, a sister of the Church, to assist. She was described as their best for the job. She was immediately well-liked by many staff for the church. One staff member made note how she fit almost instantly into the role, seeming to know where everything was in the church immediately and doing a fine job cleaning. She would often engage with the many orphan children, who grew to love her tremendously. At times, as one staffer noted, she would be seen playing with the children in the surrounding cornfield and engaged in song and dance with them. This was much to the confusion of the church staff, since little song and dance were taught to the children to begin with. On one particular instance, she was spotted in the field looking up to the sky while the children crowded around her.

At one point in time, Miriam Bell passed away. By then, many of the parishioners had once again disappeared and so too did many of the orphans. State police sent an investigator out to investigate the disappearance. The investigator and Father Clarke, head of the Church, began the search. During an interview with twin boys, just an extreme few of the remaining orphans of the church, the investigator learned about Miriam Bell. When he inquired further about her, the boys simply stated for the investigator to ask her herself, implying she was still alive much to the bewilderment of the investigator.

On one fateful evening, the investigator and Father Clarke were shaken from their sleep by the sound of a loud cackling woman. Upon investigation, they found what appeared to be an entity resembling Miriam Bell dragging the remaining twin boys into the church basement. Father Clarke proceeded into the basement, locking the door and preparing himself to engage Miriam Bell. What happened after remains unknown.

While Miriam does not appear in the game itself, she does make a brief appearance in the game's trailer, standing in front of a church while a breeze gently blows around her.

Miriam appears late in the game, after John Ward has traversed most of the darkened corridors and rooms of the Candy Tunnel system. She attempted to ambush him in a long hallway but was stifled when Father Garcia suddenly appeared and drove her off with his cross. Together, Garcia and Ward engaged Miriam Bell in the deep sanctum of the tunnel system. During this process, many cultists poured from surrounding doors to stop them. In the meantime, Bell's appearance becomes distorted and inhuman. Eventually, she launched an attack on the two. After a brief battle, she is successfully neutralized. Subsequently, a massive red demon, with multiple arms and one horizontal eye erupts from Bell revealing it was all a mere disguise. Ward awakens from his sleep immediately after, revealing it all to be a nightmare.

Revealing Miriam Bell to be a disguise. 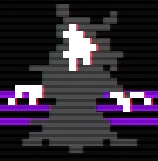 A "corrupted" version of Miriam's sprite, which randomly flashes during her battle and replaces her normal sprite entirely during the "Initiation" version of her fight 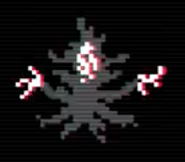 Miriam briefly appearing in the trailer for FAITH
Community content is available under CC-BY-SA unless otherwise noted.
Advertisement