A "gun with one bullet" which appears at the end of FAITH. It can be used to shoot either Amy Martin, a defiled fox corpse, a deer, the mysterious gray man, or Michael Davies. Whichever one is chosen will result in a different ending.

In FAITH: Deluxe Edition, the rifle can instead be used to shoot the mirror upstairs in the Martin House. This will require the player to go back and forth between the room where the gun spawns and the room with the mirror, as the gun only has one bullet, but can be picked up multiple times.

After three shots, the mirror will shatter and a demon hand will pull the player in, triggering a secret boss fight against the Mirror Demon. This boss fight will produce a secret lore note but will not affect or change the ending in any way. After the fight is complete, John will respawn downstairs with the gun and the game will proceed like normal, with the player deciding what to shoot with the gun. 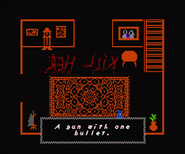 'A gun with one bullet.'

A player shooting the mirror.
Community content is available under CC-BY-SA unless otherwise noted.
Advertisement