A demonic entity in the game Faith II.

As the player moves around the church, there are candles placed in each room that resemble the layout of the church's ground floor. One candle, it's placement corresponding with the room of the church that the player is in, will be lit. A second candle will be lit for the room placement of the demonic entity. The demon becomes visible when the player enters the eastern, western, or northwestern rooms while only one candle is lit. This Demon will kill John the second it appears if John changes rooms too quickly. When this happens it will make a noticable shriek. The controls freeze making John unable to react. The proper way to fight her is to wander about the room with the single candle. When the screen starts to distort use the crux and she will appear. Her attack pattern is her teleporting to three random locations then charging at John in a straight line. She can be quite fast so caution is advised. Defeating her opens the stairs to the basement. 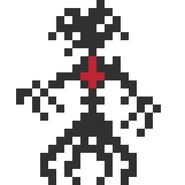