View source
watch 01:36
We're Getting Mutants in the MCU - The Loop
Do you like this video?
Play Sound

The Umbilical Cord Demon is a demon which makes an appearance in FAITH: Chapter II.

John Ward encounters this demon in the Gallup Cemetery, after going to the right portion of the cemetery area and completing an exorcism on a purple skull. The demon will then ambush John at the topmost portion of the right area of the cemetery. While it has no official name, the demon entity maintains a bloody, protruding limb which bears resemblance to that of an umbilical cord. After it's defeat, it will drop a lore note, presumably by Sandra Attwood, which describes a woman experiencing an unexpected pregnancy, a miscarriage, and then eventual induction into Gary's group of cultists. It is because of this particular lore note, associated with the demon, why the protruding limb bears resemblance to that of an umbilical cord.

The demon is one of three demons which must be defeated in order to unlock the key and exit the cemetery area. 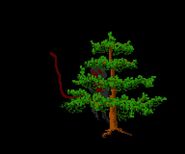